Symptoms of aromatic L-amino acid decarboxylase (AADC) deficiency have considerable overlap with those seen in other neurological disorders, which can lead to misdiagnosis. The infographics on this page describe clinical features present in both AADC deficiency and more commonly seen conditions — cerebral palsy, epilepsy, neuromuscular disorders and mitochondrial disorders — alongside important differentiating signs, to help you to make an accurate, timely diagnosis.

Cerebral palsy (CP) is a group of permanent neuromotor disorders causing activity limitation that are attributed to non-progressive disturbances that occur in infancy or early childhood, accompanied by developmental delay.1,2 It is the most common physical disability in children, with a prevalence of 1.7–3.1 cases per 1,000 in high-income countries.3

There are several forms of CP, classified according to which part of the central nervous system is damaged and the different manifestations:4,5

Many of the childhood manifestations of CP are similar to those seen in patients with a monoamine neurotransmitter disorder such as AADC deficiency, often leading to a misdiagnosis of CP.6 Consequentially, the term “CP mimic” is used to describe a number of neurogenetic disorders that manifest similarly in early childhood.2

Key distinguishing clinical symptoms of AADC deficiency that are atypical in CP
are oculogyric crises and diurnal variation of motor symptoms. Appropriate investigations, including analysis of neurotransmitters in cerebrospinal fluid, are essential for an accurate clinical diagnosis.2,7

Brain MRI is a first‐line investigation in a child or adult with an undiagnosed motor disorder which suggests CP. Brain imaging can readily reveal a cerebral malformation as the main cause of neurological symptoms. Aside from cerebral malformation, brain imaging can reveal either normal findings or specific lesions which are characteristic of a genetic disorder or group of disorders, which should prompt further investigation.2

Overlapping and differentiating symptoms of CP and AADC deficiency* 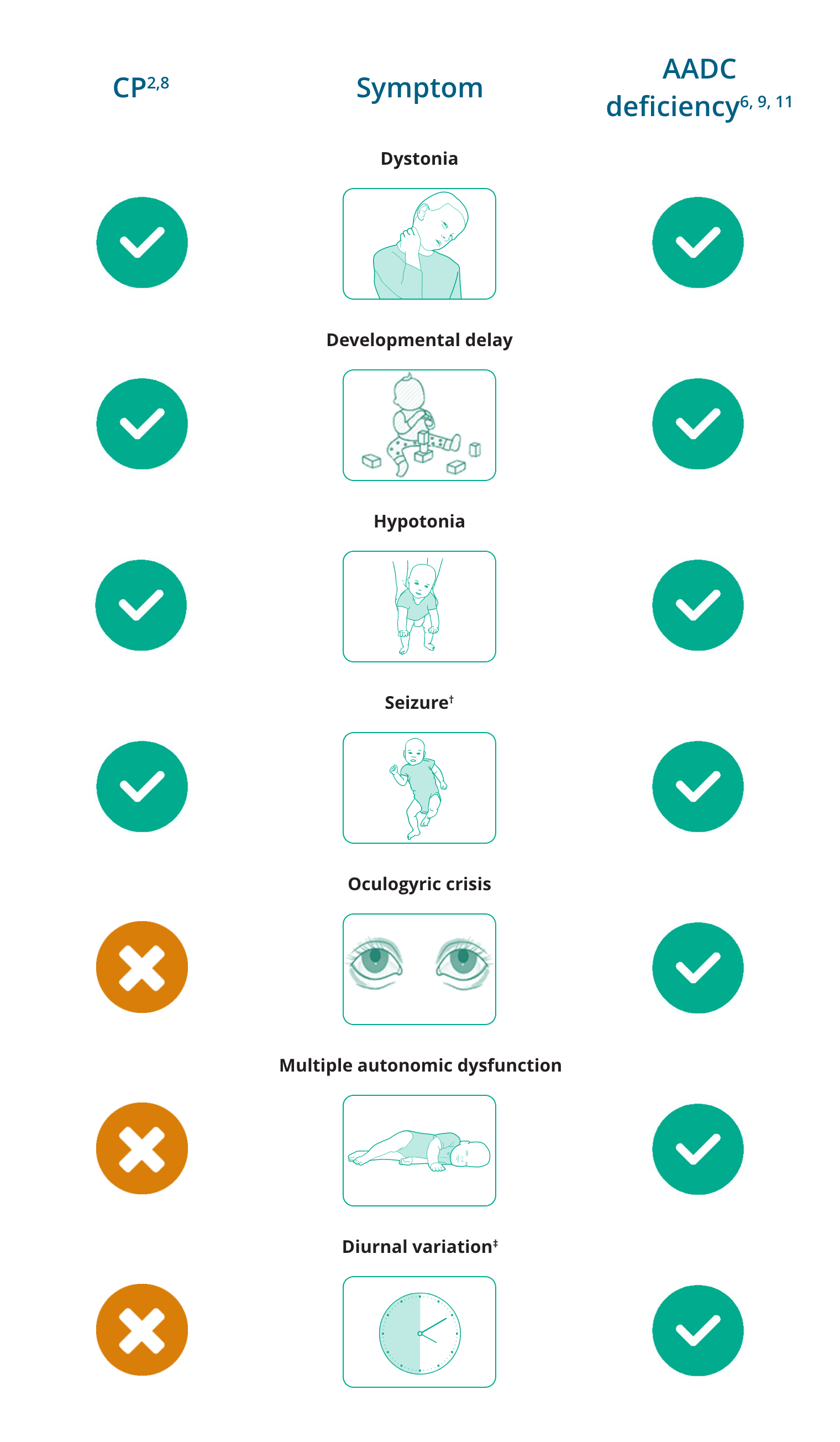 Epilepsy is a chronic neurological disorder characterised by recurrent and unpredictable seizures due to abnormal excessive or synchronous neuronal activity in the brain.1,2

It is one of the most common neurological diseases in the world, affecting around 50 million people of all ages.2

Epileptic seizures are uncommon in patients with AADC deficiency,5 although a few cases have been reported.4,9–12 Based on the limited number of case reports, epileptic seizures tend to occur in the first few years of life, are not severe, are of the GTC or complex focal subtype and, where documented, have been well controlled with administration of conventional anti-epileptic drugs.4,9–12

The differentiation of epileptic seizures from non-epileptic paroxysmal events using EEG analysis is critical to prevent misdiagnosis of AADC deficiency as epilepsy and to ensure the appropriate management of patients.4 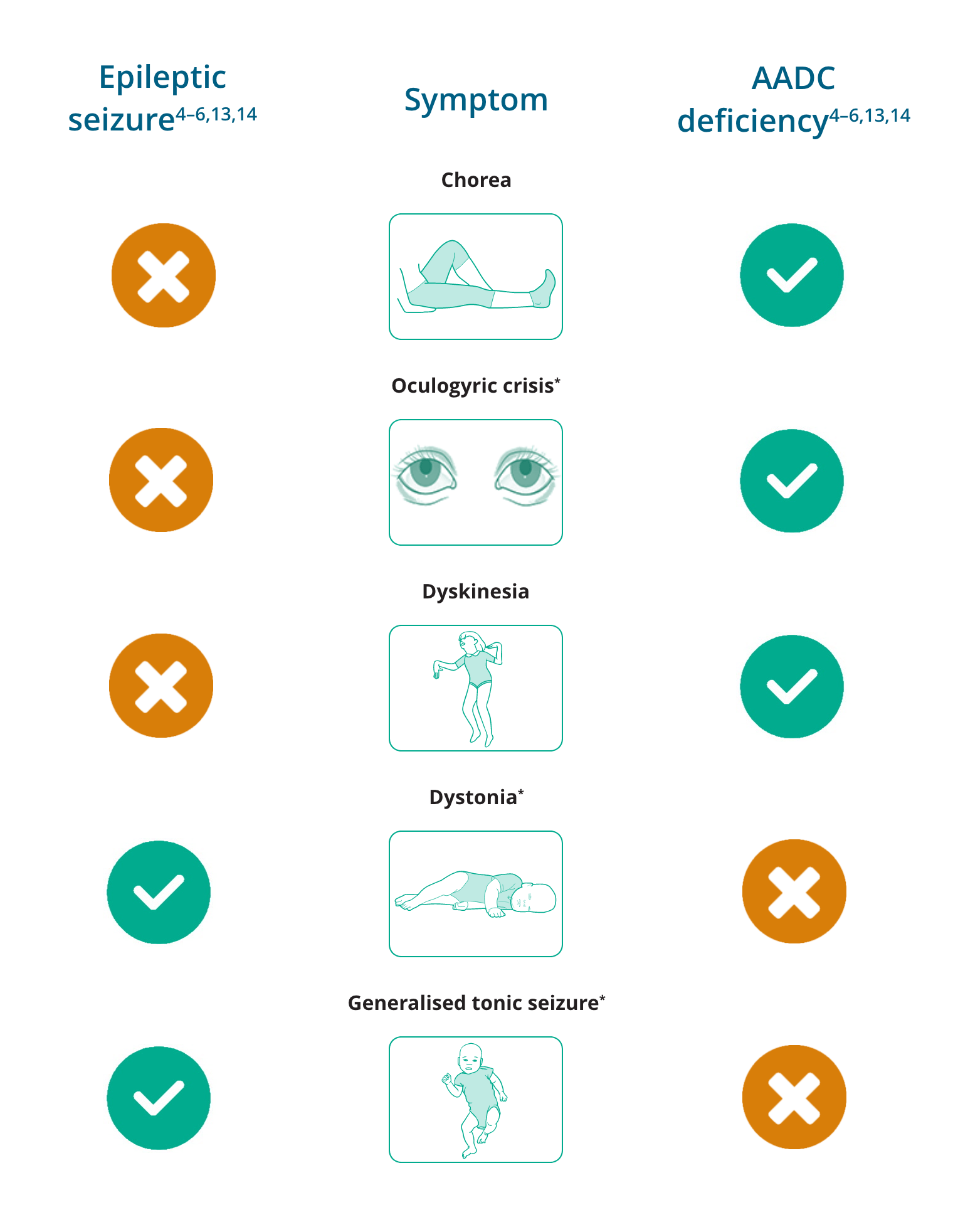 †Dystonia may, uncommonly, appear as a sign of rare epileptic disorders14

‡Generalised tonic seizures are not typically seen in AADC deficiency, but have been reported in a small number of patients with AADC deficiency who have also been diagnosed with epilepsy6

Impairment can arise in cell bodies (as in ALS or sensory ganglionopathies), axons (as in axonal peripheral neuropathies or brachial plexopathies), Schwann cells (as in chronic inflammatory demyelinating polyradiculoneuropathy), neuromuscular junctions (as in myasthenia gravis or Lambert-Eaton myasthenic syndrome), muscle tissue (as in inflammatory myopathy or muscular dystrophy), or at any combination of these sites.5

Overlapping and differentiating symptoms of neuromuscular disorders and AADC deficiency

*Also referred to as MIRAS and SCAE.

In infants, clinical features such as hypokinetic rigid syndrome and generalised dystonia can mimic those seen in AADC deficiency and other paediatric neurotransmitter disorders, making diagnosis difficult based on clinical presentation alone.3 The presence of oculogyric crises may help to differentiate AADC deficiency from a mitochondrial disorder, however, this is not sufficient to make a definitive diagnosis as oculogyric crises may present in mitochondrial disorders.4 Therefore, molecular genetic testing is warranted to confirm or rule out a diagnosis of AADC deficiency.5

Overlapping and differentiating symptoms of mitochondrial disorders and AADC deficiency

*Seizures are uncommon in AADC deficiency but have been reported.
†While oculogyric crisis has been reported, it is not typical of mitochondrial disorders.

• Earlier diagnosis may be achieved by dry blood spot testing for 3-OMD4,5

Find out more about 3–OMD testing now at: AADCDtesting@ptcbio.com

SE-AADC-0232 | March 2022
We use cookies on our website to give you the most relevant experience by remembering your preferences and repeat visits. By clicking “Accept”, you consent to the use of ALL the cookies.
Cookie settings ACCEPT
Manage consent

This website uses cookies to improve your experience while you navigate through the website. Out of these cookies, the cookies that are categorized as necessary are stored on your browser as they are essential for the working of basic functionalities of the website. We also use third-party cookies that help us analyze and understand how you use this website. These cookies will be stored in your browser only with your consent. You also have the option to opt-out of these cookies. But opting out of some of these cookies may have an effect on your browsing experience.
Necessary Always Enabled
Necessary cookies are absolutely essential for the website to function properly. This category only includes cookies that ensures basic functionalities and security features of the website. These cookies do not store any personal information.
Analytics
Analytical cookies are used to understand how visitors interact with the website. These cookies help provide information on metrics the number of visitors, bounce rate, traffic source, etc.
Performance
Performance cookies are used to understand and analyze the key performance indexes of the website which helps in delivering a better user experience for the visitors.
Uncategorized
Undefined cookies are those that are being analyzed and have not been classified into a category as yet.
Preferences
Preference cookies are used to store user preferences to provide content that is customized and convenient for the users, like the language of the website or the location of the visitor.
Functional
Functional cookies help to perform certain functionalities like sharing the content of the website on social media platforms, collect feedbacks, and other third-party features.
Advertisement
Advertisement cookies are used to provide visitors with relevant ads and marketing campaigns. These cookies track visitors across websites and collect information to provide customized ads.
Save & Accept